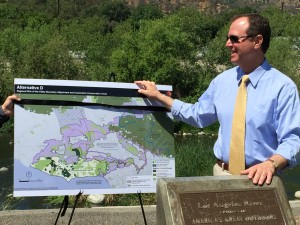 Kudos to Congressman Adam Schiff for championing the ROTV!  He has been the leading proponent of Rim of the Valley Corridor since he introduced it more than a decade ago. He is an outstanding leader and spokesperson – extremely well versed and passionate about preserving the corridor.

The media tour was an all day affair – we made four stops including: Brand Park in Glendale, North Atwater Park in LA (LA River), El Pueblo de los Angeles (Downtown LA), and Chatsworth Oaks Park – topped off with a very successful town hall last night at the Descanso Gardens in La Cañada Flintridge. It was packed to overflowing – 300 people.

Rep. Schiff is promoting Alternative D which is also our coalition’s position. (D includes adding another 313,000 acres to the SMMNRA. Alternative C is nested in D).