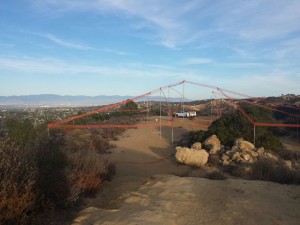 BEACON ON THE RIDGELINE …….On Friday, May 8, the Calabasas Highlands and Old Topanga filed an appeal that will now be heard by City Council – to overturn the Calabasas Planning Commission’s (PC) approval (4-1) of a VARIANCE to build an approximate 10,000 square foot mega-mansion on top of a designated significant ridgeline in the Santa Monica Mountains. The project “as designed” was opposed by the Santa Monica Mountains Conservancy and unanimously by community members who once again showed up in force – all to no avail.

Four of the five Planning Commissioners contributed to the preparation of the City’s General Plan and played an integral role in formulating/adopting policy they voted now to circumvent. Why? Particularly relevant is that there is a clear alternative – a building site whereby the city’s significant ridgeline vertical and horizontal setback rules can be adhered to. So, it’s not about not-building – it is about following/enforcing the rules to build – implementing and upholding the General Plan (GP) and Development Code.  It is the job of the Planning Commission to ensure the city’s planning laws are upheld – particularly when the planning staff has failed to do so and veered off into expediting/promoting a project above and beyond a normal staff recommendation. Especially troublesome, are the significant negative impacts and cumulative negative impacts the Broadway Trust, LLC project will have on the city, its environment, neighborhoods, residents and on its scenic resources. Why all of this effort vested against the public’s best interest on behalf of any developer to get around the city’s rules? Why continue to protect the anonymity of any developer for that matter?

Rules are the rules. Calabasas has developed a blueprint for its future and it does not include 10,000 square foot beacons on significant ridgelines. The planning staff failed. Regrettably, the Planning Commission also failed.

We are however, optimistic in our hope that the Calabasas City Council will Save Calabasas….

Much more to come on this. 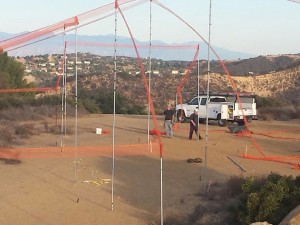 This large scale project is targeted for a designated significant ridgeline – between the small rural and antiquated communities of the Calabasas Highlands and Old Topanga – a monstrous misfit among small 1800 square foot homes – with cumulative impacts to the public’s view shed, severing wildlife corridors, and much more. Who is Broadway Trust? Who is actually behind the project which clearly thwarts and ridicules the $1 million dollar General Plan update – the city’s own residents spent 18 months crafting?

Calabasas – Attached is a Notice of Public Hearing – Request for: (1) a Site Plan Review; (2) a Variance (to build on a significant ridgeline); (3) an Oak Tree Permit (to encroach into the protected zone of 25 oak trees and for potential thinning of scrub oak as necessary for fuel modification); and (4) a Scenic Corridor Permit (for development within a designated scenic corridor) to allow for construction of a 7,633 sq. ft. single-family residence with an attached 661 sq. ft. garage, 1,320 sq. ft. basement, and appurtenant accessory structures on a previously graded pad on an existing legal 5-acre lot located at 3121 Old Topanga Canyon Road (APN 2072-023-013) within the Hillside Mountainous (HM) zoning district and Scenic Corridor (SC) overlay zone. The notice may also be found online at http://www.cityofcalabasas.com/public-notices.html.

If you have any questions about the notice, please contact the Community Development Department at (818) 224‐1600.