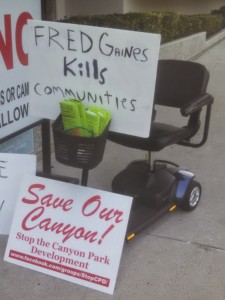 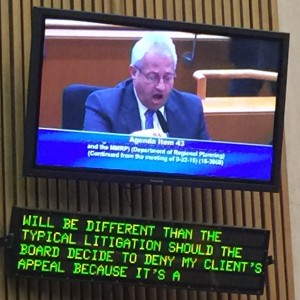 Fred Gaines represents developers​ ​whom​ ​he helps circumvent land use laws to up-zone, bulldoze more and bigger developments for bigger profits,​ ​at the expense of our communities, property values, and natural resources.

Left to Right: Gaines is the attorney for a Calabasas developer wanting to build a housing tract in Big Tujunga Canyon and up-zone from approx. 22 homes to 242.
Gaines ​threatening to sue the​ Los Angeles County Board of Supervisors on Oct. 20 while​ representing a developer pushing to circumvent the Local Coastal Program and build a 16 home subdivision in the heart of our coastal resources and protected village of Monte Nido.
Will the real Fred Gaines and Alicia Weintraub please stand-up?
With the Calabasas election just around the corner,​ ​Fred Gaines and Alicia Weintraub have had ample opportunity to DISCLOSE what it is they do for a living and their actual voting​ ​records. Not only haven’t they done that, they’ve​ ​also​ ​hidden behind a facade of something they​ a​re not, just this week​ ​deflecting and casting their own weaknesses disingenuously onto their opponents.

So, time for a reality check.

FACT: Both Fred Gaines and Alicia Weintraub work for developers and are paid by developers. Weintraub works for Rosenheim and Assoc., and Gaines is a lobbyist and a developer’s attorney – Gaines & Stacey, LLP. Google them, check them out and you will see why they have not been forthcoming.

FACT: Both Gaines and Weintraub have voted to approve and give variances to developers​,​ usurping the city’s planning​ and land use​ laws and state environmental laws.

FACT: Gaines and Weintraub are not only running as a slate – they are a slate! Their voting track records are virtually identical – greenlighting and leading project approvals.

FACT: Good bye to quality of life. Many of the current projects and those in the pipeline that have been given special treatment by Gaines and Weintraub will destroy forever the character of Calabasas. ​These projects will increase density​ and traffic​ -​​ from ​three new proposed hotels, ​to ​two new subdivisions, the monstrous Avanti townhome development, mega-mansions on our ridgelines, General Plan amendments, and re-zoning/up-zoning.

FACT: Gaines and Weintraub are decreasing property values by approving development and density that is inconsistent with the city’s planning laws.

FACT: Gaines and Weintraub are driving Calabasas from ​”G​ateway to the Santa Monica Mountains​”​ to ​”West End of the San Fernando ​Valley​”.​

FACT: Gaines and Weintraub ​have ​ignore​d​ their own residents​ ​in their decision making. Check out important project hearings on line at the city of Calabasas to see for yourself.

FACT: Both appear to be tangled in a mess of potential conflicts of interest with a variety of developers and expediters.