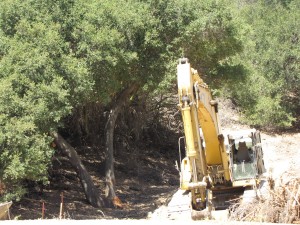 Add three pools and two cabanas to the footprint, lengthy driveways from Mulholland Hwy. and many project impacts that cannot be mitigated. The estate project sits on the Mulholland Highway scenic corridor, on hillside rural, residentially (RR) zoned land.

This approval comes on the heels of another two home development project Mr. Handel is currently finishing constructing on Valmar Road – also, in the city of Calabasas.

The appeal, made by the Cold Creek Community Council, was centered around the city’s precedent setting bypass of an EIR where environmental, cumulative impacts and project alternatives would be required to be analyzed. Public comment during the hearing also focused on questioning the city staff’s facilitation of the development project and circumvention of the city’s planning policies and CEQA.

Two former city of Calabasas planners were also instrumental in helping to expedite the project for the city and developer. It was difficult to discern exactly where that line between city and project proponent fell, as both the staff and consultant(s) worked in tangent during the course of the evening to convince Council to deny the appeal. One of the consultants, the project facilitator, works for Diamond West, Inc. (who was also recently awarded a public works contract by the city) and, the other is an employee of Rincon Consultants, Inc. Rincon is the consultancy firm that has been contracted to do numerous projects and provide consulting service for the city of Calabasas over the last several years. Councilmember Bozajian welcomed him back to the city.

Calabasas city manager, Tony Coroalles, interjected frequently throughout the Council discussion asserting support for the developer’s project in a variety of ways (thus denial of the appeal). His actions caused a resident to wonder in public comment if the City Manager was a 6th Councilmember.

Councilmember comments, questions and actions or lack thereof were interesting —- watch the entire proceedings for yourself. (www.cityofcalabasas.com –  Archived Video –  Council Meeting  May 23, 2013)

Other notes of interest:

– After public comment had closed, and in the middle of council deliberation, the developer went up and sat down next to Maureen Tamuri, the Community Development Director, who in turn went to immediately speak to the City’s Planning Director, in charge of the ongoing discussion and proceedings.

– According to the staff report, “At the September 28, 2012 ARP meeting, the Panel recognized the effort made by the applicant [their co-member’s project] to incorporate all suggestions at their previous meeting. The applicant proceeded to demonstrate to the Panel a computer simulated video depicting the visual impacts of grading and construction to the Scenic Corridor.” The city states that Mr. Handel was not involved in the deliberation of his project at the ARP.

– Articulate and compelling testimony in support of not circumventing an EIR was given by members of the public at the hearing, including asking; what the rush was; why was the developer’s project being expedited around the city’s General Plan and Development Code land use policies and the state’s environmental protections; and, that the Mitigated Negative Declaration (MND) did not and could not substitute for an EIR. Other issues and impacts of the project the public brought up were: a February 2013 letter, from the Santa Monica Mountains Conservancy, commenting on the proposed project which included a demand for an EIR; the rolling in and granting of a Lot Line Adjustment contrary to the procedure outlined in the city’s municipal code; oak tree permits including the removal of six oaks and encroaching into the protected zone of many others; protected black walnut removals; unmitigatable impacts to riparian vegetation and habitat; the severing of the wildlife corridor;  building height variances; grading impacts hidden and lack of a plan outlining cut and fill, truckloads, noise, traffic, timing, etc.; 70 foot high retaining walls; no required fire approvals obtained; no Fish and Game or Army Corps of Engineers approvals or permits obtained; and no streambed alteration agreements.

After the City Council’s vote to support Mr. Handel’s project and deny the appeal, members of the public report that Mr. Handel followed them outside the Council chambers and then outside cityhall badgering them.