Dear Friend of the Chaparral,

You are likely shaking your head, like I am, as you hear all the news reports about the latest fires. Dead trees. Past fire suppression. Over-grown brush. As with all the other times, most of what you are hearing is not true.

Here’s what’s actually been happening with the fire that’s posing the greatest risk to lives and property now.

The Creek Fire in the Sierra National Forest very rapidly raced through two earlier fires (French Fire of 2014, and Aspen Fire of 2013) that had been heavily post-fire logged by the US Forest Service, followed by planting tree plantations. They removed nearly all of the large snags in most of the higher-intensity fire patches under the guise of “fuel reduction,” claiming that this would curb future fires. 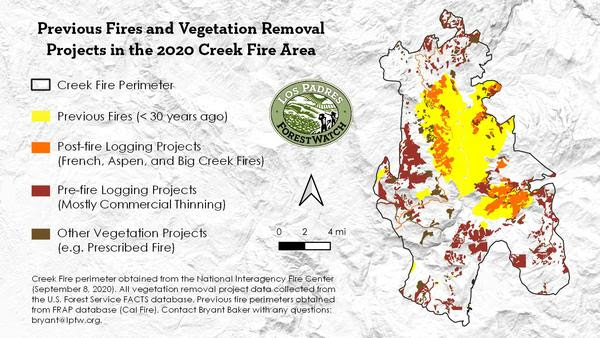 
The Creek fire is now burning quickly through a large commercial thinning project area (Bald Mountain project) just east of Shaver Lake and dozens of additional hikers are reportedly trapped. The Forest Service has been told repeatedly that thinning would not stop a wildland fire and thinning often makes fires spread faster, but they have continued to ignore the science.

Some logging interests continue to try to claim that the fires are spreading mostly because of dead trees and “overgrown” forests, but it’s the opposite.