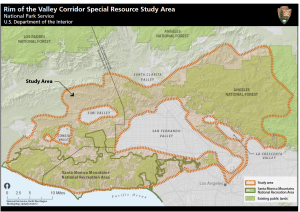 The Las Virgenes Homeowners Federation has been a longtime supporter of the Rim – Alternative D – the most resource protective option.

Rim of the Valley – More Parks for More People – Connecting the Dots in Preservation for Future Generations…..

Olmsted was a conservationist & decided to see Yosemite Valley. He proposed, through Senator John Conness, that Congress designate Yosemite Valley & Mariposa Big Tree Grove be preserved as a National Park. This was the first land set aside by Congress for public use, after his report from the Board of Commissioners in 1896. When Teddy Roosevelt was elected President – he designated Yosemite as a National Park.